Hovsep Pushman was an American artist of Armenian background. He was known for his contemplative still lifes and sensitive portraits of women, often in exotic dress. He was born and grew up in the town of Dikranagerd in Asia Minor, where his family, originally “Pushmanian,” was in the carpet business. Pushman showed artistic ability early, and at age 11 was the youngest student ever admitted to Istanbul’s Imperial School of Fine Arts. His paintings typically featured oriental idols, pottery and glassware, all glowing duskily as if illuminated by candlelight. They were symbolic, spiritual paintings, and were sometimes accompanied by readings, which help explain their allegorical significance. Most important, they were exquisitely beautiful, executed with technical precision. 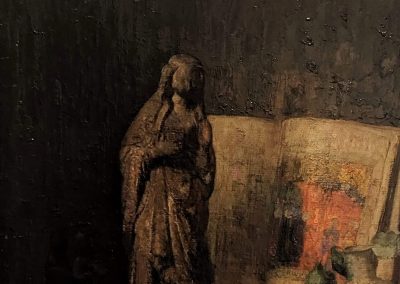