Sedrak Arakelovich Arakelyan was an Armenian artist and a representative of the Realism art movement. Arakelyan was born in Jauk, Russian Empire (now Armenia), on December 17, 1884. He graduated from the Moscow School of Painting, Sculpture, and Architecture in 1916, where he had studied under S. V. Ivanov, K. A. Korovin, and A. E. Arkhipov. Sedrak Arakelyan was an outstanding and highly respected artist. He became an Honored Artist of the Armenian Soviet Socialist Republic in 1935.

Arakelyan participated in numerous exhibitions not only in Armenia but also in exhibitions in Venice (1924), New York (1929), Stockholm (1930) and Paris (1934). In 2015 Armenia’s National Gallery hosted an exhibit of the artist’s artworks, which included paintings and graphic works from different creative periods, as well as etudes and sketches.

Today his works can be found in major galleries and museums, including the Art Gallery of Armenia (Yerevan), the Tretyakov Gallery and others. 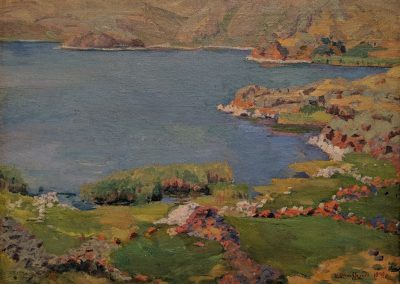